Earlier this year, Apple introduced its refreshed MacBook Pro’s, which are equipped with Thunderbolt-ports. Initially, this serial interface developed by Intel was named "Light Peak”, but the name was changed when it was decided to use electrical instead of optical signals. The Thunderbolt interface has two bidirectional 20Gbps channels for a total bandwidth of 40Gbps, which is significantly faster than the USB 3.0 standard. Important to know is that it can also deliver 10W of power. 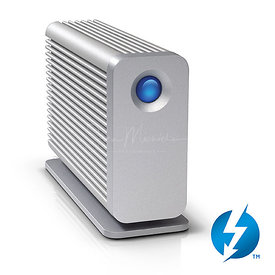 Packaging and connections
The design of the Little Big Disk was done a couple of years ago and was originally developed by the Scot, Neil Poulton. The housing is very recognizable with a ribbed side and in the front a large blue power button. On the back you will find the fan and the two Thunderbolt ports together with a Kensington connector and the connector for the power cable. In case you would like to have the hard drive on a foot, you should know that everything is provided for and the socket can be fixed with 2 setscrews. However, a Thunderbolt cable is not included. 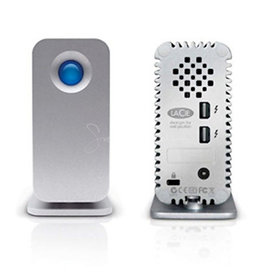 As the "Interface Daisy Chaining" is supported, the Little Big Disk hard drive has a second Thunderbolt connector. Shortly, this means you can connect all your other Thunderbolt products.

Fan
The fan was a great disappointment: it makes a lot of noise for such a small disk. But the separate power adapter is, in my opinion, the most negative item. Nowadays, you can find dozens of hard drives which are very quick, even mobile and have no external power supply. I’ve hoped that LaCie had done more research to solve this problem. Personally, this drive is not useful to me because I regularly travel to places (like f.e. parks in Kenya and Finland) where there’s no electricity available. In this case, having no electricity means you can’t use the disc ...

Volume
Apart from the noisy fan and the need of electricity,  the volume of the hard drive is another somewhat disappointing topic. If you simply want to put the disk on your desk, it’s nice and small, but when you want to use it as a mobile hard disk, it appears to be rather big. For the photographers among us: it is almost as large as the power charger for a battery from a Nikon D3 or D4 camera and the necessary space for a power supply and cable and Thunderbolt cable should also be foreseen. 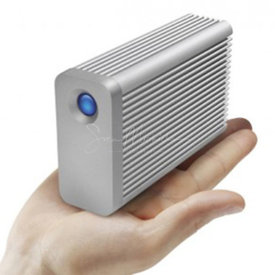 Speed
Rather than giving you a serie of numbers and statistics in MBps, I prefer to only inform you about my personal impressions and indeed after a first test with a folder of 75GB, I noticed that it was fast, really fast. My folder was copied in just over 5 minutes. Editing photos (stored on disk) in Photoshop works very fast. I would almost dare to say, you probably won’t notice a difference between this external Thunderbolt drive and the internal hard drive.

Price
With a suggested retail price of 399 euros, this "Little Big Disk" from LaCie is not for everybody. For just over 120 euros you can already purchase an external 2.5 "drive with a capacity of 1TB. For the high speed that the Thunderbolt interface uses, you pay 280 euros extra. The Little Big Disk is only interesting for people who need speed at all price. I can imagine that the high price is justified for those people who work with large photo and video files. For me personally, it is less interesting because I do not always have electricity on the remote places. Therefore, I would like to urge Lacie to build the same hard disk with an internal power supply for reasonable prices and preferably in a slightly smaller box.

Conclusion
The Little Big Disk with Thunderbolt connection is very quick. For Mac users who are looking for external storage, at high speed, this drive is ideal, but they should not forget the negative points of this speed monster, namely the external power, the noisy powerfan and of course the price 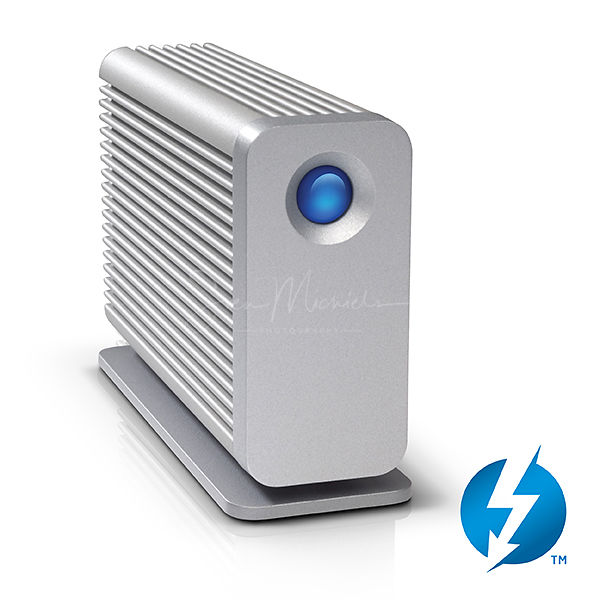