About 6 months ago, Wacom introduced a new version of the popular Intuos 3. The next version is called “Intuos 4”, not really an original name. But does Wacom need to change a well-known name?

Tablet:
What‘s a tablet and why would you use it? I just wanted to answer that question because I hear different reactions and confusions. It's certainly not correct to think that only people who want to draw digitally will use a tablet. Graphic designers, photographers and architects will use it to correct their pictures or drawing plans. Persons suffering RSI, (repetitive strain injury -  which is, amongst other things, an injury to the joints and muscles in the under arm), also use a Wacom tablet as a mouse. Last year, I was one of them until I decided to buy one for my office job and one for at home because I spent about 85 hours/week behind the computer. Since several months I don’t have pain anymore and don’t take any medicines since then. 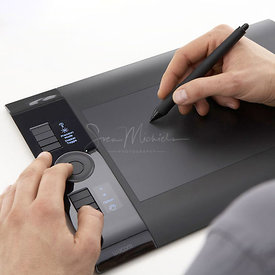 The Intuos 4 can be use by left- and right-handed users. Standard it’s set up for right-handed users, but you can change it easily by turning the tablet 180° and connect the USB cable at the left top side. The text orientation of the buttons will be changed in the settings menu.

The tablet has 8 “Expresskey” buttons (except for the “small” model). Each button has its own led display with the name of the function behind it. This is a great step ahead! For each program you’re using, you can configure what these 8 buttons need to do. The “Touchring” in the middle has 4 layers to zoom or circle through the different layers in Photoshop. You can configure all of this within a few minutes. 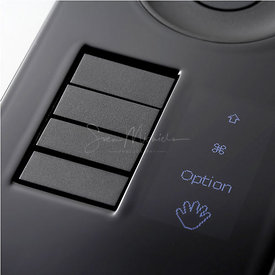 On both sides, you can find an USB connection to connect the tablet to your pc (Windows/Mac). The cable in the box is a long USB cable which could be very useful when the pc isn’t next to the tablet.

Format:
The Wacom Intuos 4 is available in 4 sizes: S, M, L and XL. Probably because all displays are developed as wide screens, these tablets are all adapted to the wide-screen. The easiest way to Word is when your screen and tablet are related; like both wide-screens. The S-version is too small to work with, except when travelling. This version doesn’t have ledts. The M-version (I used this one for the test) will be the most sold version. The active field is 23,4cm x 14,6cm. If you are using a normal display (<22”) it’s a good size. If you were using a large screen (>22”), I would recommend the L-version (100 euro more expensive than the M version). The XL version is really a large tablet and therefore very expensive, so it will be less sold. 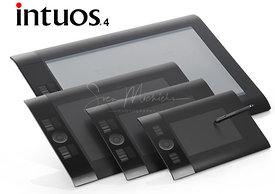 Grip Pen and holder:
Wacom modified his grip pen and holder, the pen can detect 2048 pressure levels instead of 1024 with the Intuos 3 and it also has a better sensor in the pen. Wacom made the pen also lighter. Personally, I can feel the pressure difference, but I can’t feel the difference in weight.

The switch knob at the side of the pen is still there with the same function as the Expresskeys, you can change the functions in the software menu. With the pen and holder many pen points come standard, even an extra rubber to have more grip on the pen.

The pen works wireless and even without a battery. Wacom calls this technology “Electromagnetic resonation technology”, radio waves will be send to determinate the position. Wacom invented this technology.

The new holder is also a nice piece of design. This new version can be opened and used as a holder for many other pen points. Now you’ll be sure not to lose them anymore. Very useful! 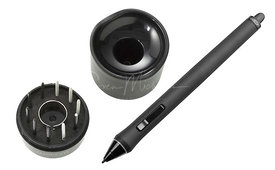 Tool ID:
The grip pen and the airbrush (optional) have a “Tool ID”. This means that they have their own ID. When you are using several grip pens (for example one as grip pen, one as airbrush, one soft brush pen) at the same time with the same tablet, the tablet will see all pens as different ones. All settings can be changed in the system menu, but they will be saved in the grip pen. Most users will never use this function because Wacom only delivers 1 pen per tablet. Graphic companies will use this function.

Using the tablet:
As I’m an Apple user, the most shortcuts are for Mac. Windows users need to go to the support website from Wacom. There they can also find a lot of information.

The installation process will take about 5 minutes. You can install the software from the cd delivered with the box, but I prefer to download the latest version from the website. On the cd you can also find a digital manual.

If you’ll ever need to contact the support site from Wacom, they all start to ask downloading the latest version!

After installing the software, you connect the table and go to the system preferences and click on a little Wacom icon. Here you can change almost everything. Expresskeys for every program, the Touch wheel, it seems that there’s no end! But still, a very handy function.

First impressions:
The first thing that took my attention was the grip pen. It feels really nice and reacts very accurate (even the gun function). For those who think the grip pen is too small, Wacom delivers an extra thick rubber cover for it. You can use it if you like, personally I don’t like it.

The Express-leds (next to every ExpressKey knob) are very useful to help your memory. If you use it for many programs and for each program you give a knob a different function, it could be confusing. The knobs are a little hard to push in the beginning, but now I’m getting used to it.

The new Touch Ring and Precise Mode are really inventive. The Touch Ring is handy to select the size of your brush and the precise mode is handy for editing a precise area. The pen reacts slower. You activate it by pressing the “Precise mode button” and as long as the pen stays on the surface, you stay in precise mode.

The cake menu is the last new feature. You can activate it by pressing on the ExpressKey knob. Now you’ll get to see a cake menu on the screen with different functions in it. All these functions, you need to configure them yourself. Before using it, I didn’t thought it would be that great, now I'm not using other features any more than the cake menu. I have to inform you, I discovered a bug in the program: when your mouse pointer is at the side of your screen and you want to open the cake menu, this is a part of this menu you can’t see. I think Wacom will resolve this issue with the next software update.

Conclusion:
With the new Intuos 4, Wacom has delivered a nice piece of equipment for many people. I do prefer a completely mat black tablet, but still I can recommend this tablet to anyone. For the cake menu issue, I hope Wacom resolves this problem fast! I used a Wacom Intuos 4 M in this review. In Belgium, you’ll get one for about 345 euro, in The Nederlands you’ll find them for about 280 euro. 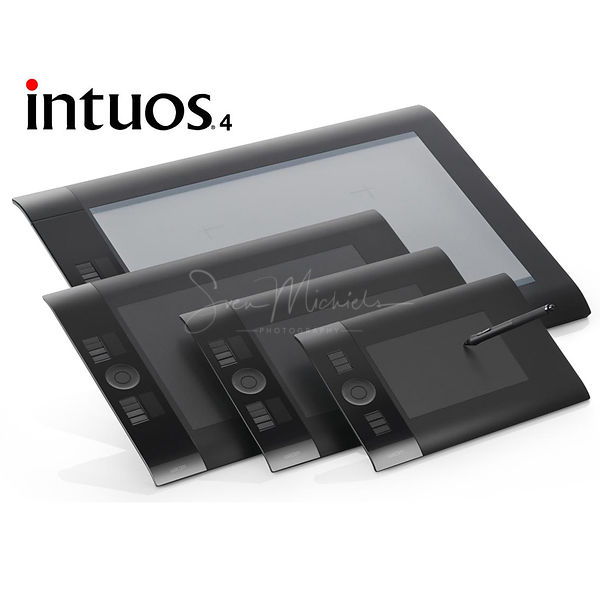