After writing a review about the Wimberley swing head, I received several reactions all about the same subject: would you compare 3 high quality swing heads? Because I’m interested in receiving ideas from readers, I started to search on Google which brand produced such models.

To find a swing head made for heavy prime lenses, you need to look around and compare many things. The Wimberley WH-200 does the job very well, but which brand can stand up next to it? Jobu-Design recently launched his BWG-Pro 2 Black. An active member on my site gave the idea to add the Redged RWC-3 to the list.

Does the absolute favorite Wimberley or the underdog Jobu win this test? Or could the new and not very well-known Redged win this battle?

Package:
I do agree that the package of a product can’t be a major factor to decide what product you’ll buy. It is still an interesting section to discuss. Even in this small test, we see two “camps”:  Wimberley and Redged are in “camp A” and Jobu-design is in “camp B”. The “camp A” (Wimberley / Redged) delivers the product in a compact box with the Arca-Swiss plate separate from the arm. Everything comes with perfectly cut mousse in order to perfectly protect the material during transport. The “camp B” (Jobu-design) delivers everything in a lager box without any mousse.

Size and weight:
When we compare all 3 swing heads, there are some remarkable differences in size and weight. When you decide to take this head with you on a photo trip, you need to consider the importance of the weight of your luggage on the airplane.

Build quality:
When I started to write this review, I had the idea that all 3 professional swing heads were identical. After the review, I had to admit that there are many differences: the placing of the knob can be quite different, the rubber finishing coating of the knobs for better grip on some swing heads and the additional extra features on some of them.

The Jobu head can be seen as the largest, most robust and also the heaviest in this test. The 2 major knobs are finished with a rubber coating. The knob to determine the height of the Arca-Swiss plate does have that rubber coating. The Jobu has an extra feature, namely a special “Lock” knob to lock the swing arm. The plate is quite small, (6,5cm), but you can simply remove it and replace it by a larger version. When using really large tele lenses, you need to have a large Arca-Swiss plate to have maximum stability. The head is in 1 piece, which means that you need a lot of space to transport it. 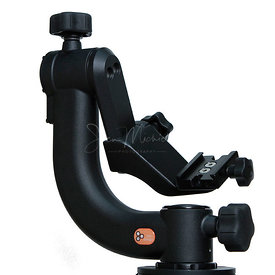 The Redged can be seen as a light Wimberley version. The arm is a copy of the Wimberley. Not even 1 knob has a rubber coating and the head has a Arca-Swiss plate of 6,5cm. You can’t replace it by a larger version. Redged is working on that issue. 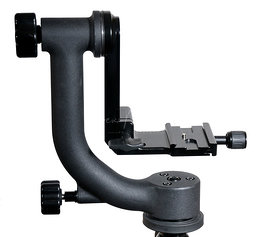 The Wimberley is almost identically to the Redged, but has some important differences: all rubber knobs and a standard Arca-Swiss plate of 9,5cm. Generally, you can see that this version has had a better build quality. 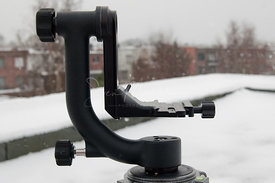 Using swing heads:
To remove the heads out of the box and install them on a tripod, you need a maximum of 1 minute. At the side you have 2 large knobs (often in rubber): Wimberley and Redged placed them at the side, Jobu placed one knob at the top and one at the side. The highest knob serves always to swing the arm; the lowest knob serves always to turn the head. The only knowledge you need to have to use this head is the placing of your Arca-Swiss plate. When you place your lens on it, you need to check that the middle of the lens and the top of the head are equal. The placing of your lens foot on the plate depends whether your lens is camera, tele convertor, … etc. The easiest way to fix the lens foot in its place and release the swing arm gently, when your lens and camera aren’t balanced, you need to move the lens foot a bit to the front or back. When you can release all knobs and your lens + camera stay balanced, the work is done. Before you start walking with everything, check if all knobs are well closed!

Using almost identical heads I thought that the result would be somehow identical too, but the answer is simple: this is not the case! Personally, I prefer to take pictures with resistance in the movement, I do it with all knobs half released. When you close or open all knobs completely, you can’t take pictures easily. To do it with the Wimberley, it is really easy. With some gentle work, I can do it with the Jobu. With the Redged, I can’t do it. 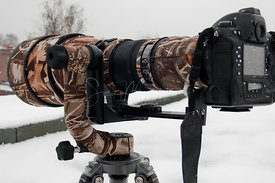 Price:
In present financial crisis, we all know that the price is a major factor. The Redged head costs 300 euro, the Jobu costs 499 euro and the Wimberley is yours for about 600 euro.

Conclusion:
I’m really pleased with the Jobu and Wimberley. The Redged is a bit simple, but when you see the price it’s normal. A question you can ask yourself is: is the price a major factor? When the answer is “YES”, buy the Redged. When the answer is “NO”, it is more difficult. Do you want a swing head more compact for transport? Take the Wimberley. When you chose the Jobu, you have a heavy and robust head made for the tallest lenses on earth.

To finish this review, I would like to thank Foto-Express and Redged to send me their products to enable me to write this review. 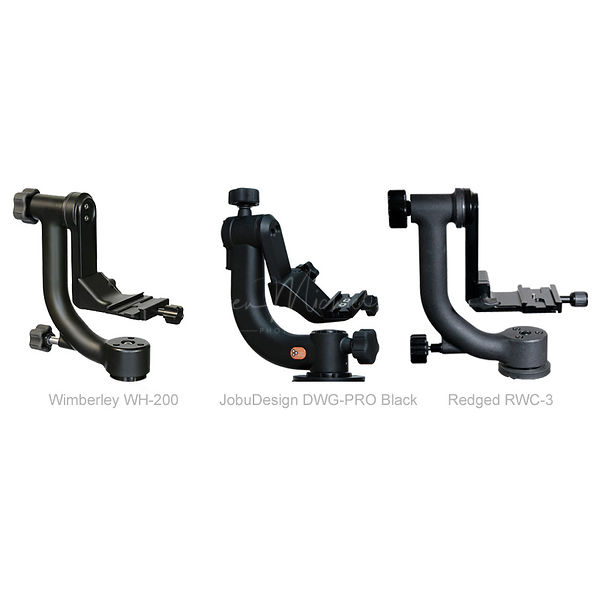