For several years, there has been an outright race on megapixels in the DSLR-world. Where a top-DSLR camera about 3-4 years ago barely had 10 megapixels, we now see the launch of cameras with 50 megapixels (recently released Canon 5DS). These are values that are close to a medium-format camera. Still a very small part of the professional photographers swears with this last type of cameras.

Pentax has recently launched the Model "645Z" which contains the sensor of a medium format camera and still has the advantages of a DSLR. I got the opportunity to test this extensively during my photo trip to Iceland. 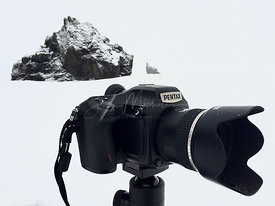 Sensor
Some people are obsessed by the megapixels, but there is also something like the size of the sensor. DSLR sensors have a size of 36x24mm, where the digital medium format cameras are larger: 44X33mm (recently even 53,7x40,4mm with the latest Phase One IQ3 with 80 million pixels). The Pentax 645Z has to divide the great advantage of 51 megapixels over the large 44x33mm sensor.

First handling
As soon as I received the camera with the lenses and all the accessories, I started taking pictures. Before, I had read a lot, but I had no experience at all with a Pentax. I must admit, in the beginning I wasn’t used to work with all the controls and functions of Pentax, but soon I was able to link all the buttons to their function, the camera worked very smoothly. Maybe users of other Pentax models have even less trouble. 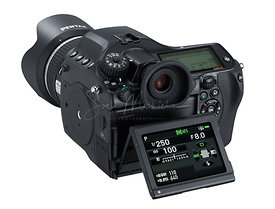 If you see the camera for the first time, it looks quite large (156x117x123mm), but in practice you soon get used to it.  It was the weight (1550gr) which I found a bigger issue. For Iceland it wasn’t such a problem, because over 95% of my pictures were taken on a tripod, but if you want to travel light, you shouldn’t take this type of camera with you!

With a Nikon DSLR, I don’t need to think when I look through the viewfinder of the camera. I see immediately all the numbers and functions. With the Pentax, I needed to get used to it. As long as you are exactly in front of the viewfinder, there is no problem, but when the camera is high on a tripod or low to the ground, I couldn’t see all numbers and functions anymore. Perhaps this is solved by a rectangular right angle viewfinder but unfortunately, I wasn’t able to test this.

Tiltable LCD monitor
It's not exactly a groundbreaking function, but at the very low or high positions, the tiltable 3.2" LCD screen is really helpful. All the information on the screen tilts along as you rotate the camera. While shooting in "Live View mode", I have the impression that the focus is rather slow, at least slower than in normal mode. 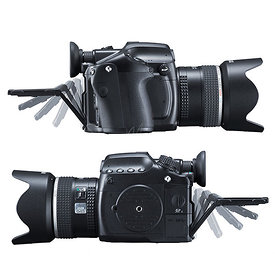 Image quality
My absolute reason to opt for the Pentax 645Z is definitely quality. From the first images straight from the camera, I was blown away! A huge WAW... The level of detail and sharpness, in combination with the 51 megapixels, is unbelievable. You really will be amazed how far you can zoom. A true delight!

Dynamic range
A major advantage of a medium format camera's is the dynamic range. With a DSLR, you can retrieve data from over- or underexposed to about two stops. Here you can go up to 5 stops and still have a very decent result.

ISO
A sore point of traditional digital medium format cameras is the use of high iso. Often these are used on iso 50 (or max 100) because otherwise too much noise comes in the pictures. If you use traditional medium-format cameras in the photo studio, there is no problem. The Pentax 645Z uses a Sony CMOS sensor with the advantages of high light sensitivities. Up to iso 6400, you can safely shoot with a useful result. When you go higher, you will get not only a lot of noise and a color cast in your pictures, but honestly, I think 3200 is already more than high enough.

Practice in Iceland
After all the theory, it's time to tell you more about my experience with this camera in the icy Iceland with temperatures up to -16°C. and heavy wind!

For Iceland, together with a friend, I planned a trip along the southern coast of the island. Departing from the airport in Keflavik all the way to Höfn (or as the locals saying "Hopn") a little 600km further.

The first day was gray and still we decided to go out towards the "Golden Circle" with highlights such as the Geysir & Gullfoss. Packed and ready, we explored the first geysers and waterfalls. After only an hour or two, I realized that I actually used only one camera, the Pentax, with 55mm (32mm in DSLR terms) lens.

The next waterfalls were photographed with every time a bit less equipment … First with the backpack in the car and second camera on the shoulder and later even without a second camera. The 90mm macro lens, I continued to take in case I wanted something more than the 55mm allowed me. Only a few times, I used the macro lens for macro purposes.

The handling of the Pentax was actually pretty easy, even with a pair of thick gloves. Besides the aperture, shutter speed and iso you do not change so much settings while shooting landscapes.

During shooting low to the ground, I have often used the Live View function of the tiltable screen. Focusing is quite slow in this mode.

This type of photography (landscape photography) doesn’t require rapid series of photos and maybe I’m happy about it. Theoretically, the Pentax shoots 3 photos per second, but in my opinion it isn’t build for that purpose. Take your time to look, look again and measure several times before taking the picture. Then press down the shutter and enjoy the blissful sound of the shutter...

If you're photographing a complete day, you will soon notice that your memory cards quickly get filled what just proves how addictive this photography is.

The Pentax uses 2 SD(XC) memory card slots. Since I mostly use CF or XQD cards and knowing that I only had two 32GB cards available, you will understand that these completely filled each evening!  A raw picture of this Pentax has quickly 70MB, but there were peaks at up to 180MB so.  If I buy this type of camera, an investment for two 64GB SD cards wouldn’t be a luxury. 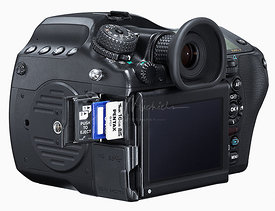 Something more about the lenses. As mentioned earlier, I did not receive a wide-angle lens, but a 55mm f/2.8 and a 90mm Macro f/2.8

The 55mm lens is a blissful piece of glass. It is perhaps a little too wide to use as a portrait lens, but for reportage photography or landscape photography (as in my case), this lens proved to be a perfect travel companion. Compact and not too heavy. The front lens is perfectly straight, so you also can use filters whenever you wish. You should know however that you will need 67mm filter size.

The 90mm macro is a solid brick (literally a heavyweight!). The lens is quite large, but with the hood attached, it is nearly as long as my 70-200mm lens. Size and weight might be huge and or heavy, the results are amazing. I'm normally not into macro photography, but with this, you can really enjoy photographing for hours on the same spot. If I may be honest, I think my best pictures during this trip, were taken with this lens.

Print
If you want large photo prints, you're really good with this type of camera. A single photo printed at 300dpi is already 60x40cm. Want to print at 220dpi without enlargments, a 90x60cm prints is possible! The panoramas I made by stitching 24 portraits together, gave a final result of an image of more than 1GB which can be printed on 3,65m to 65cm (300dpi) or for those who like their living to be redecorated: 11x2m (100dpi)

Price
The main reason for not purchasing a medium format camera for many photographers, is the price. Cameras as a Phase One iQ3 cost easily about 30000€. The Pentax has a very big advantage: it will "only" cost you 8000€. This is still a lot more than a DSLR, but the benefits of a large sensor can’t be underestimated neither. Needless to say that all the above listed prices are for the body only. 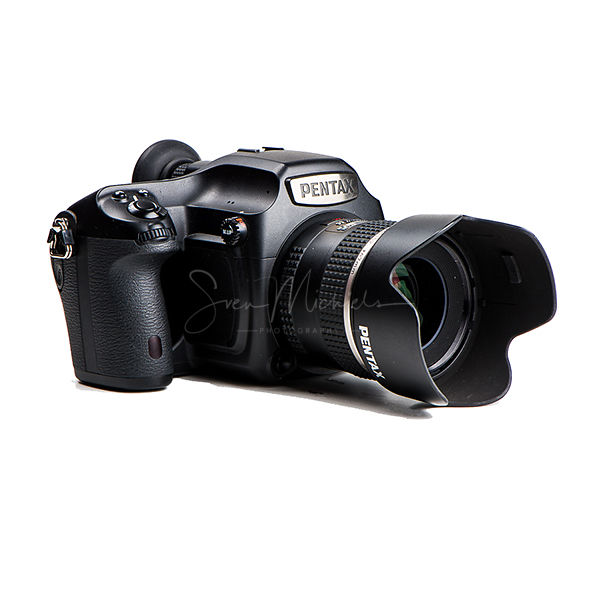