During a photography trip to the Bavarian Forest earlier this year, I discovered more-and-more photographers abandon the familiar swing heads and start to use a so-called "Fluid Head". The original Fluid Heads were ball heads in a bowl of oil, they can still be found in very expensive brands like Sachtler. We are talking about 5000€ up to double for just the head! 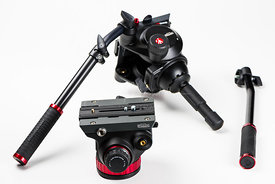 The reason that most photographers with heavy telephoto lenses abandon the well-known Wimberley or Jobu-Design swing heads can be explained by the fact that the vibrations cause blurry pictures. The Belgian importer of Manfrotto, HOTZ, was kind to borrow me two of the latest additions for a comprehensive test: MVH502AH & MAV504HD.

I do like to begin with a brief explanation about the material, which I have used until now.  For the test I installed both heads on my Gitzo GT5541LS tripod. This tripod is the predecessor of the current top tripod, the GT5542LS, both carbonfiber tripods with a very high load capacity and also a very high stability. The lens and camera I used for the test were the Nikon AF-S VR 400mm F/2.8 and Nikon D4S. The latter two have a total weight of just under 6kg. On one occasion, I have used the Nikon AF-S VR II 300mm F/2.8.

The reason I'll reflect sometimes Wimberley, is simply because I use the WH-200 Swing head (REVIEW) and the SK-100 Sidekick (REVIEW). The comparison is not all derogatory to these fantastic products.

Packing:
Although it is not a decisive factor in the purchase of such professional equipment, I think it is always nice to see whether a supplier focused on proper packaging. Here, we can be very short: Manfrotto provides a large box with a nice design containing an almost fully assembled head and a basic guide. Besides the arm to operate the head, everything is mounted, as well for both the 502 as for the 504.

Weights and Measures:
When we talk about the size and weight of the head, then you will immediately notice a strong difference: the 502 weighs 1700gr, where the 504 weights already 2900gr. Especially with the 504 mounted on your tripod, you will soon notice that your tripod is not intended to walk a full day in the mountains. 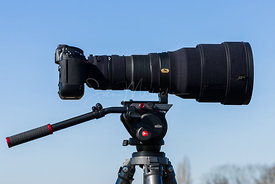 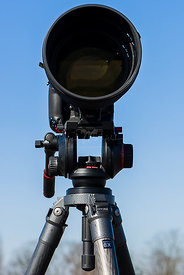 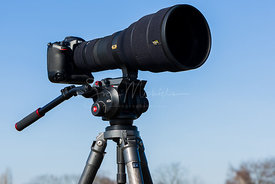 Once you have assembled the new head and your tripod to take everything for your shoot, you’ll notice that your current tripod bag is probably too small.  Several brands have a custom bag. Gitzo foresees a a choice between GC4101 & GC5101 (depending on whether you always want to disassemble the control arm).  Manfrotto has about 7 bags of different lengths ranging from 70cm to 120cm length.

Build:
Although I thought previously that most professional video heads were identical, I noticed with this test that there are many differences. Between the two models I've tested, there’s a large difference in construction. The 502 is a "flat base" head. You can install this head without any modification to your tripod. The 504 is however another story.  For this head, I needed to remove the top plate (for which you have received the right tools at the purchase of your tripod) out of my Gitzo tripod and install a 75mm plate in the shape of a bowl. For the 5-series Gitzo you should buy a GS5321V75. If you have another tripod, it may be that this adapter plate is different. Inform your photography retailer about this and ask him to advice you on this inquiry. By placing the head in your tripod, you actually create a "levellingbase" in order to put the head perfectly in level. However, this is limited to a few degrees.

If we look over the heads individually, you will soon notice that the 504 really is the big brother of the 502. The 504 allow you to create a counterweight with 4 positions (no counterweight - 2.5kg - 7.5kg and 5kg), which gives you a really nice feeling when you work with such large lenses. Without counterweight your head is completely free and you can therefore use with two fingers and your camera lens in 360 degrees. With my combination of 6kg, I found it very pleasant to work with the counterweight set to 3 (or 5kg).

A very useful feature on both heads: the lens plate (you have installed this on your lens foot) will be clicked into the foreseeing slot and even if you accidentally unscrew the knob, your lens and camera will not fall on the ground. There is still a safety button on the back of the head. Once that has been pressed, you can remove your lens. 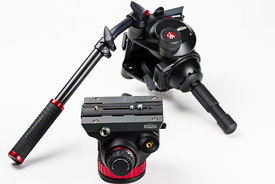 If I reflect to my current equipment, I would compare the Manfrotto 504 with the Wimberley WH-200, really meant for heavy work with lenses of at least 400mm to 800mm. The Manfrotto 502 is similar to the Wimberley SK-100 (that you mount on a ball head). Also top equipment, but more for 300mm F/2.8 or lighter lenses. 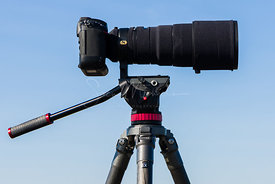 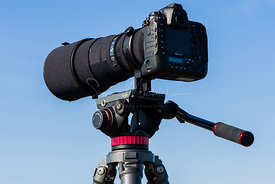 Test:
For this review, I wanted to test both heads in different environments:

#Jumping: The jumping was first programmed and I wanted to find out how both heads behaved in an environment where you need to quickly make horizontal movements while restricting motion blur has to be limited to a minimum. Here I quickly came to the conclusion that the 504 head was more suitable for my lens-camera combination. The sand surface wasn’t smooth and the ability to turn the head exactly level with the levelling base (which is incorporated in the head) is a very nice feature, which I therefore used frequently.

#Flyball: The task for these two heads was shooting a flyball training. Flyball is a sport where the dog owner holds a frisbee to throw away as far as possible and then let the dog catch the frisbee before it hits the ground. Spectacle, action and super high speeds are only a few keywords. During this test, it is important for the heads that you can quickly be able to rotate in all directions. Where in the jumping most often horizontal movements had to be done, in flyball the dog runs to all sides and you must follow quickly and accurately. Again, the 504 head was the winner.

#Concerts: For the last test, I took each head to another concert. I have taken the 502 to the Antwerp Lotto Arena to be used with a 300mm F/2.8 lens at a concert of Ladies of Soul FT Natalia and the 504 together with my 400mm F/2.8 lens was taken to the Antwerp Sportpaleis for a concert of Anouk.  There’s no winner here, both were winners. Depending on the lens you need for the concert (determined by the position photographer / podium) one head is more useful than the other.

Price:
Since we all have to pay attention to our expenses, the price will be unfortunately an important factor. The Manfrotto 502 costs approximately 190€ (the Wimberley SK-100 will cost you a third more). The Manfrotto 504 is sold for 420€ (the Wimberley WH-200 Swing head will cost you easily 150€ more). As mentioned in the above review, for the 504 you will need a special adapter bowl (GS5321V75 for the Gitzo 5-series costs 80€). Generally speaking, a swing head is more expensive than these Manfrotto heads.

Conclusion:
Photography with very large lenses is more difficult than many people think. Motion blur is one of the main reasons of bad images. A solid tripod and a decent head are crucial.    Until now, I always used a swing head, but many photographers have already switched to a "fluid head" (the original Fluid Heads were ball heads in a bowl of oil, they can still be found in very expensive brands like Sachtler) to prevent the motion blur. During extensive testing, I found quickly the difference between MVH502AH & MAV504HD. If your lens is equal or greater than a 400mm F/2.8, then I would not hesitate and buy a 504HD. Superb head with a very extensive list of features for optimum ease of use. Do you have a 300mm F/2.8 or less, then you'll probably have enough with a 502AH head.

Finally, I would like to thank the Belgian importer of Manfrotto, HOTZ to borrow me these products for this review. 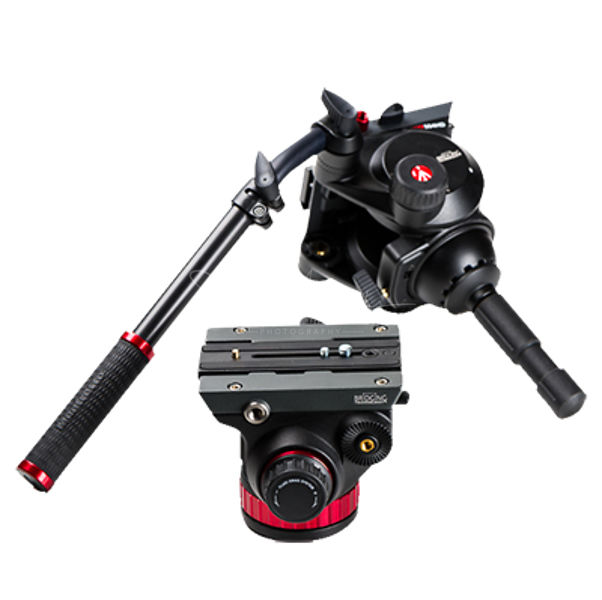