As photo and video files are becoming larger and are therefore taking a considerable space on an internal hard drive, you might start thinking to move them to an external drive. A second reason might be that you should make a backup and preferably on a device that at least has two hard drives on board on which everything can be safely stored. In case you also want a high-speed connection, such as Thunderbolt, then this test of the "LaCie 5big Thunderbolt" will be of much interest to you. I was able to test the highest model with 20TB of capacity. 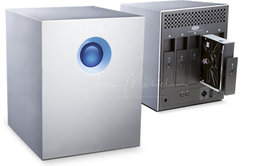 Model
The LaCie 5big Thunderbolt is an external hard disk with 5 internal hard drives. Depending on the model you buy (10 or 20TB), the size of the disks varies. The 20TB version contains five identical Seagate Barracuda XT 4TB hard drives. Since this external hard drive isn’t a "NAS" (Network Attached Storage), but a "DAS" (Direct Attached Storage) there is a clear difference:  it can’t be connected to a router in order to serve for different people within the same network. It’s clearly intended to serve directly one pc/mac. A similar point for a NAS/DAS is the encryption on the data in a RAID mode. Without getting too technical, but keeping it all understandable: this means that the data is stored on multiple disks at the same time. There are different RAID modes, each with its pros and cons ... For this model LaCie only allows RAID 0 & 1. The first of these is the fastest with full use of speed, but less secure. RAID 1 might be slower, but you also lose half of your capacity.  Hopefully they can solve this problem via a firmware upgrade. RAID 5, which might not be as fast as RAID 0, but it’s very safe and doesn’t take that much capacity ... It might increase the price a little bit, but it’s certainly worth it.

Unpacking and Installation
About unpacking, we can be very short: LaCie raises no money in stunning packaging or handsome bags & boxes. The hard drive is packed however in foam and all cables, power supply and manual CD are located in a separate white box. The setup is simple: connect the Thunderbolt cable to the external drive and to your pc/mac and you're done! 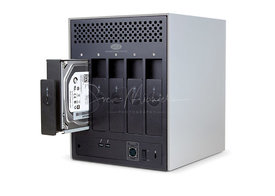 RAID
Before using the drive, you must determine the raid mode. By default, the drive is configured for RAID 0. A Striped RAID set disconnects the drives in the enclosure for better transfer speeds. Data is stored on all disks as a striped pair, which they share the demand for reading and writing files. Unlike a Mirrored Striped set (RAID 1), the available capacities of each disk are added together for maximum storage capacity. With improved read and write speeds and maximum storage capacity, a Striped RAID set is a great addition to the already exceptional performance that the Thunderbolt technology delivers. Data is also easily accessible as a RAID 0 stripe creates a logical volume once the desktop is activated. A disadvantage of a Striped RAID set is the lack of built-in data protection. If one of the drives fails, all the files become inaccessible since parts of each data series are written on the striped torque. Therefore, LaCie highly recommends a backup on another product at least once per day. I hope LaCie can provide RAID 5 and then you don’t need to take a secondary backup.

If you really want the RAID mode (eg from RAID 0 to 1) to be changed, all hard drives will be formatted. This means that everything on the disk will be deleted. So please make sure to take a back up!

Speed
When testing the speed, we used BlackMagicDesign "Disk Speed Test". All tests were performed with a stress test of 5GB: 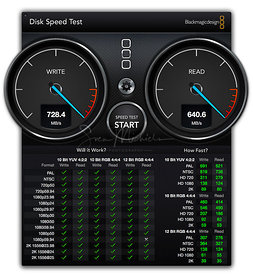 In comparison, a Western Digital My Passport USB 3.0 on the same test takes only a speed of just 50MB/sec for writing/reading.

The external drive from Western Digital is quite slow compared to the LaCie product; the last one is up to 14,5 times faster!

Noise
In order to keep all disks as cool as possible, LaCie built a system through which cool air is sucked in from the bottom edge and brought to the back side through all disks, and all without noisy fans!  You hear that the disk is spinning, but it is never distracting even if the drives are installed on your desk.

Backup
If you have data on your internal disk, LaCie offers you different ways to backup automatically. Would you like to have a virtual copy of your mac stored, then I would opt for Time Machine. This is a standard application on all Apple computers.  You simply connect the drive and in the settings of your mac, you determine that this disk should be used as “TM disk”. If you like to create a manual backup of specific folders, use the software "Intego Backup Manager Pro", which is free when you bought the drive. This will just copy everything to the disk or sync. WYSIWYG! (What you see is what you get) Almost everything is possible. You can fine-tune everything and it is done automatically on a pre-determined schedule.

Conclusion
The LaCie 5big Thunderbolt is a true speed killer! Speeds up to 728.4 MB/sec is really a pleasure to work with. Unfortunately, there is no RAID 5 available what I would expect in this type of external storage. You should also be prepared to pay a high price for this extreme speed: the 10TB version costs 1079€ and for double the capacity another 880€ extra. (Official prices include VAT) 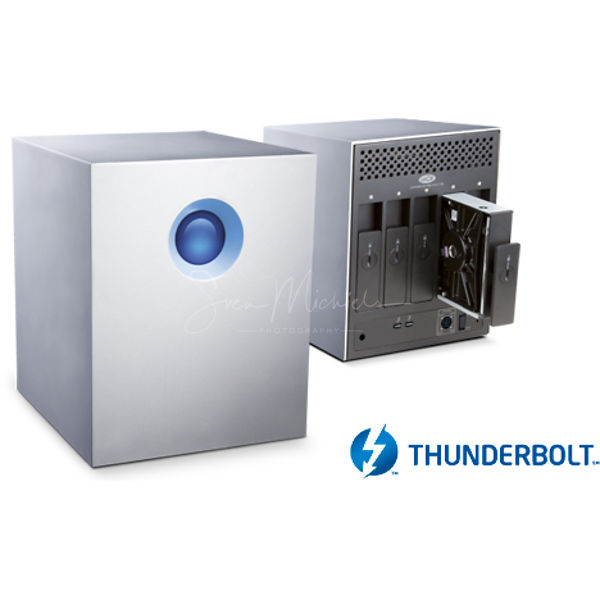